Alright friends – time to start planning for the 2017/18 season. We may not be too sure who we will see on the ice, but we know when and where we are playing.

Per the Capitals: “Over half of the Capitals’ 40 home games at Verizon Center fall on weekends, which includes seven games on Friday, nine on Saturday and five on Sunday. The schedule features holiday home games on Veterans Day (Nov. 10 vs. Pittsburgh), the day after Thanksgiving (Nov. 24 vs. Tampa Bay) and Super Bowl Sunday (Feb. 4 vs. Las Vegas). This marks the 11th time in the last 12 seasons and the 10th consecutive season the Capitals will host a game on Super Bowl Sunday.”

Caps Bye Week is set for 13-17 January to give players a break.

The All-Star Game is set for 27-28 January at Amalie Arena in Tampa, Florida. Hotels are already pretty full.

FYI: The XXIII Olympic Winter Games are scheduled for 9-25 February. Although the NHL has said they do not support player participation, some (including Alex Ovechkin) have indicated they will play for their home country.

Some Notable Home Games Include:

Home opener is October 7 at 7pm at Verizon Center.

Caps will face Pittsburgh four times. The first time in DC on October 11, again at home on 10 November-Veteran’s Day. Then up to Pitt February 2 and on April Fool’s — no we’re not kidding.

November 24 is our Thanksgiving game at home with Tampa Bay visiting – so don’t go to FL for your vaca.

Final game before the playoffs and likely Jersey Off Their Backs night is 7 April against the New Jersey Devils.

And some possible cool road trips–check out Caps Fan Club and Caps Road Crew for information about traveling with other Caps friends. If you are looking for weekend games, it is slim pickings.

14 October is a possibility for a Saturday game in Philly. Just bring protection with you.

November 4 is a good game in Boston – a Saturday hopefully before the snow really hits.

Plan your Christmas holiday early and see the Caps play in Arizona on 22 December and Las Vegas on 23 December– makes for a nice long weekend.

February 17 take off to the Windy City for the Blackhawks.

Western Ho! The Caps dead to California in March. They play the Ducks 6 March, the LA Kings 8 March, Sharks 10 March.

Visit the new Red Wings stadium in Detroit on 27 March – its a Thursday.

There are no back-to-back games in Florida this season.

And don’t forget there is development camp, training camp, and pre-season to get us through to October. 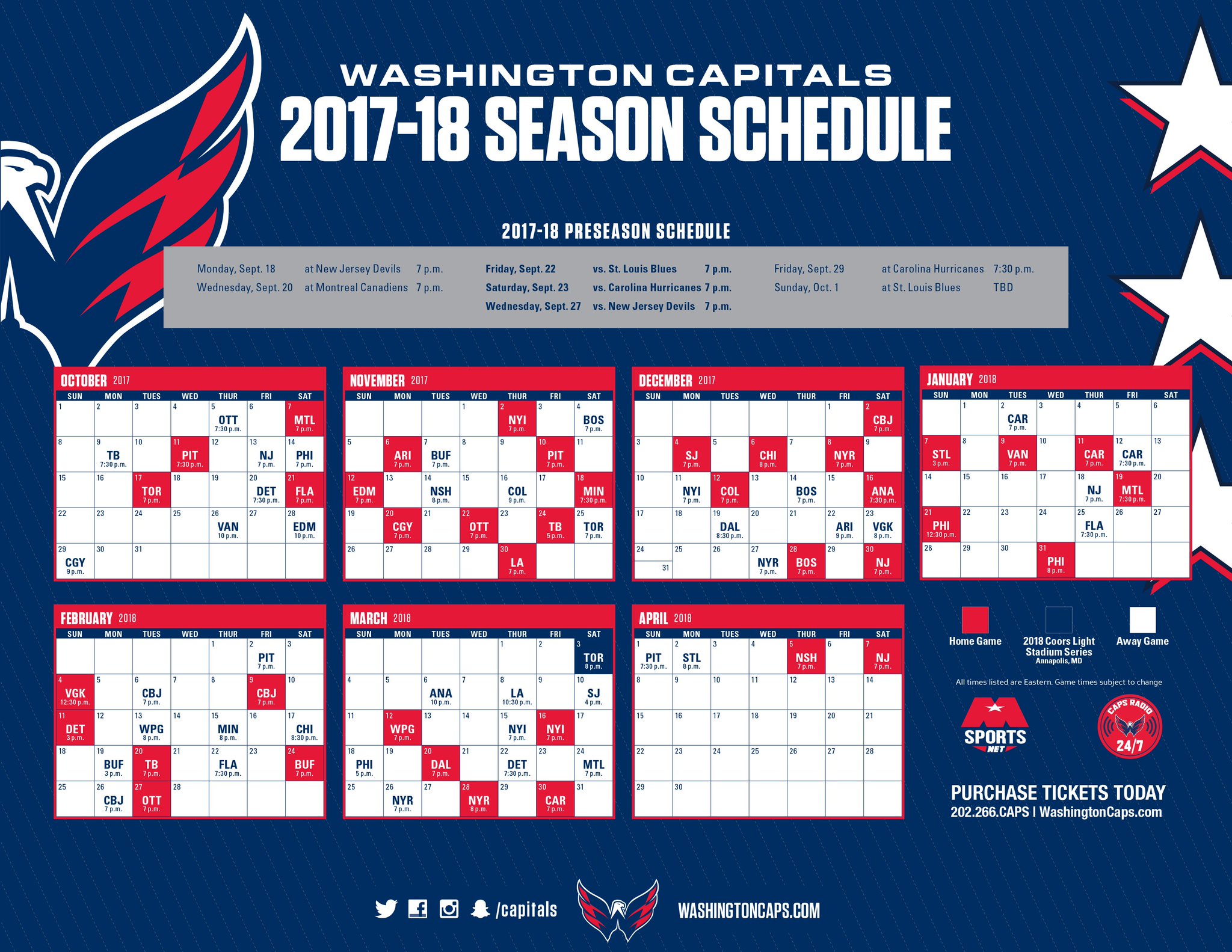 Managing Editor for Friends in Cold Places. View all posts by Maggie Marcum

FiCP and the Washington Capitals

We are not officially affiliated with the Washington Caps. Our content is original – especially our photos. The views here are our own. Feel free to share our photos – just please leave our logo visible.